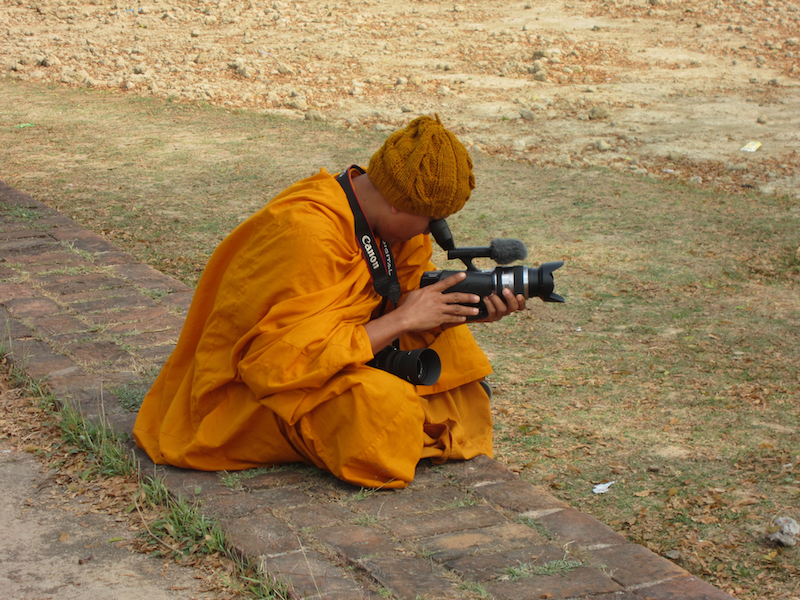 Siddhattha Gotama (the Buddha) gave his first sermon in the deer park located at present-day Sarnath, India. In addition to creating the original sangha, or community of practitioners, this monumental moment in the history of religion marked the Setting in Motion the Wheel of the Dhamma, which resulted in the beginning of Buddhism. As one of the four major Buddhist pilgrimage sites, Sarnath attracts pilgrims and visitors from all over the world, including Southeast Asia where the majority of the Buddhism practiced is Theravada. This conservative school is perhaps the closest to early Buddhism, and requires its monks to follow over 200 precepts. Although these vows include abstinence from listening to music, handling money, and singing and dancing, a proscription regarding the use of Canon Hi-Def Digital Video Cameras was apparently neglected. Certainly, this Thai Theravadin monk understands the only thing that exists is the present — when the past existed it was the present, and when the future comes it will be the present — but with a Canon, he can relive the past as the present in the future. Like most aspects of popular culture, technology continues to pervade religious traditions.