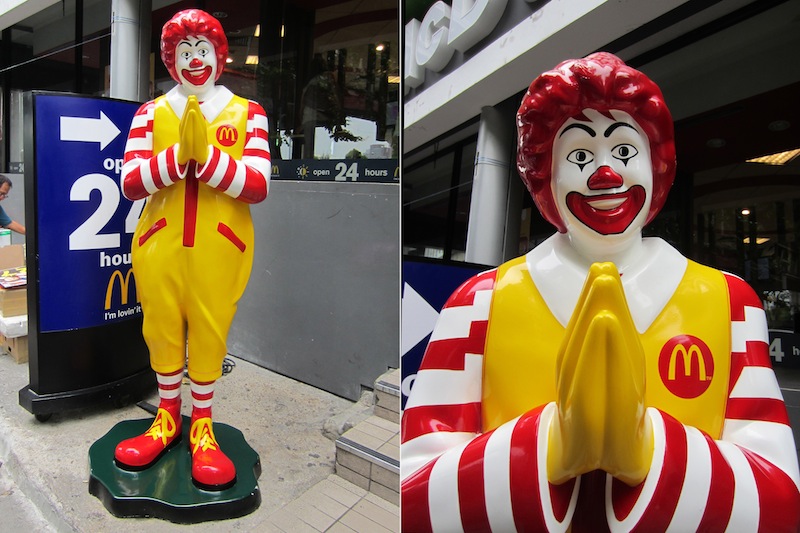 In Thailand, the traditional greeting is called wai and entails a slight bow with the palms pressed together in a prayer-like manner. Similar to the greeting of Namaste in India, the wai bow is used as a sign of respect. The lower one bows, the more respect is shown. The bow usually lasts five to ten seconds long, depending on the level of the body position. The lower the bow, the longer it takes, and thus more respect is being shown.

On a recent trip to Thailand, I stepped into a McDonald’s to cool off. As I walked up to the building, I was greeted by a Thai-looking Ronald McDonald in the wai posture. Immediately, I felt at ease and welcomed. As I walked up to the counter to ask the cashier for a glass of water, she greeted me with the wai posture, lowering her body with her hands in front of her. After cooling off, I reciprocated the gesture and left to head back out into the city of Bangkok.

Although the wai posture is not always exhibited in a traditional religious context, as it also has a close connection to sociocultural nuances regarding social standing and superiority, Thailand’s population is 90% Buddhist, so the intersection between its religious and sociocultural dimensions is necessarily close. In a Buddhist context, this posture is used to display veneration toward Buddhist monks, spirit houses, and temples. When I saw the depicted statue at the McDonald’s in Bangkok, the intersection between popular cultural artifacts and religion became obvious: the global corporation’s mascot greeted passersby, hands pressed together, bowing slightly forward, merging an icon of Western consumerism with Eastern values and traditions.

Brittany Armstrong is currently pursuing an undergraduate degree in Interdisciplinary Social Sciences at the University of South Florida. The focus of her studies is religion and sociology. In addition to these disciplines Brittany is passionate about women and gender studies. She enjoys traveling and recently returned from a semester abroad studying the world’s religions in South and Southeast Asia. Upon graduation, Brittany looks forward to attending graduate school and furthering her studies.