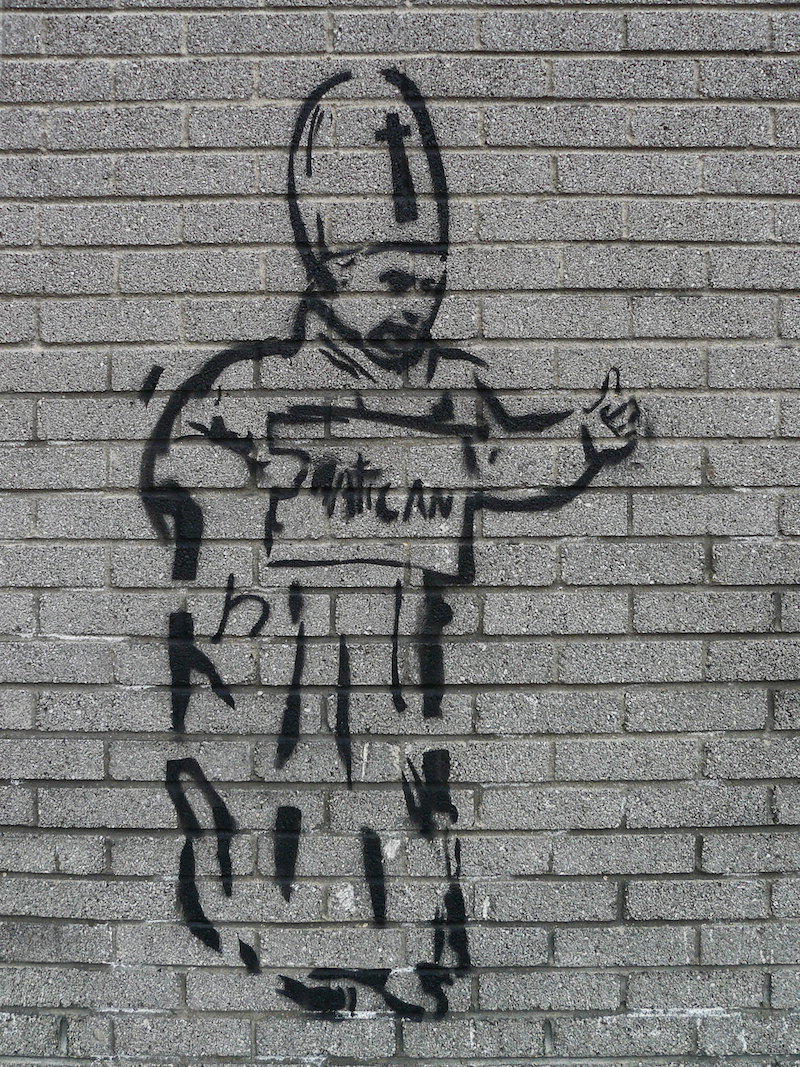 St. Jame’s Gate Brewery is home to the dark, creamy nectar known as Guinness. During a recent trip to Dublin, Ireland, the location of this famed brewery, I noticed a stenciled rendition of what appeared to be the Pope on one of the complex’s outer walls. According to the small sign the bishop held, he was looking for a lift to his headquarters in Italy. As whimsical as this may be, amid the confluence of pop-art and religious iconography, and in a country that is mostly Catholic, one might entertain the observations of street artist Arofish regarding illicit street art (from the 2007 film Bomb It): it is shocking to see artwork on the sides of public buildings, but “a lot of the work does lose its power and its potency when it’s just not illegal.” Thus, observers might be left asking themselves: can any such power or potency be discerned in this papal representation? And, more generally, is religious iconography inherently more powerful and potent when it is illicit?

Seth has served as the chief editor of Nomos Journal since its launch in 2012. His particular areas of research interest include philosophy and religion in popular culture, new media, remix studies, pirate politics, and the religious dimensions of alcohol production/consumption. Seth is currently a doctoral candidate at the University of Denver, writing a dissertation on remix theory and the study of religion. His work has appeared in Salon, PopMatters, various academic journals (most recently, Transformative Works and Cultures and Culture and Religion), and assorted popular culture and philosophy volumes (most recently, American Horror Story and Philosophy and The Handmaid's Tale and Philosophy). When Seth is not reading or writing, he's usually tending his meager garden, traveling, or making his way up Colorado's 14ers. He's also a connoisseur of beer and mead, and has been a homebrewer for several years.