Obediently, like an animal, he slowly stood erect – and what I saw then, coupled with what I had heard previously, or despite it, came as a rather sickening shock. The eyes were the worst.

Blue eyes, to be exact. A blue “deeper and bluer than any human eyes, a blue that burned like ice,” George R. R. Martin tells readers in the opening pages of A Song of Ice and Fire. But that’s not exactly where William Seabrook was taking his readers in The Magic Island (1929), his oft-cited travelogue of Haiti and the source for the epigraph above (p. 101). The scene was meant to illustrate an encounter with an actual zombie working the sugar cane fields, though it might as well be the testimony of an encounter with a White Walker in Westeros. 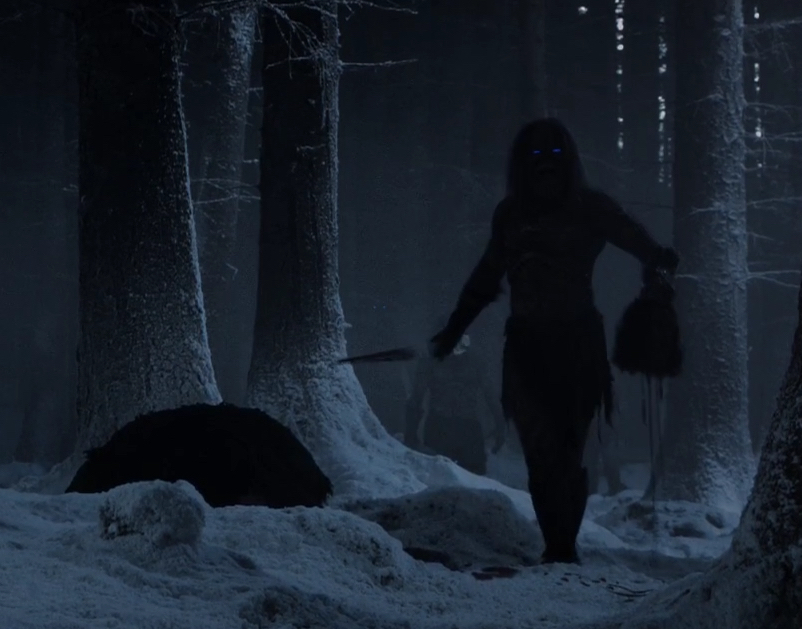 The ghoulish and mysterious White Walkers spent eight seasons slowly heading south in HBO’s adaptation of Martin’s saga – as powerful beings raising the dead, both new and old alike, to do their bidding.

The undead slaves (“wights”) in Game of Thrones unquestionably follow their masters’ orders, uniquely summoning a scantly-used trope in zombie narratives today: not exactly the cannibalistic, infectious, or brain-seeking fiends filling the cinematic roster since George A. Romero’s Night of the Living Dead (1968), but the slave-in-death zombie of Haitian folklore that existed well before Romero made, “They’re coming to get you, Barbra,” a catchphrase as common among horror film aficionados as a Dornish wine in King’s Landing.

This is far from the first time Martin’s frostbitten mashup has been addressed, but Haitian or West African elements are generally overlooked in favor of the more ice-forward lore of Northern Europe and the British Isles – for obvious, aesthetic reasons, I’m sure. But I think teasing out the parallel between his White Walkers and wights and the pre-Romero zombie demonstrates an important feature in Martin’s narrative that other readings might overlook: how an already subversive figure is being critically remixed. 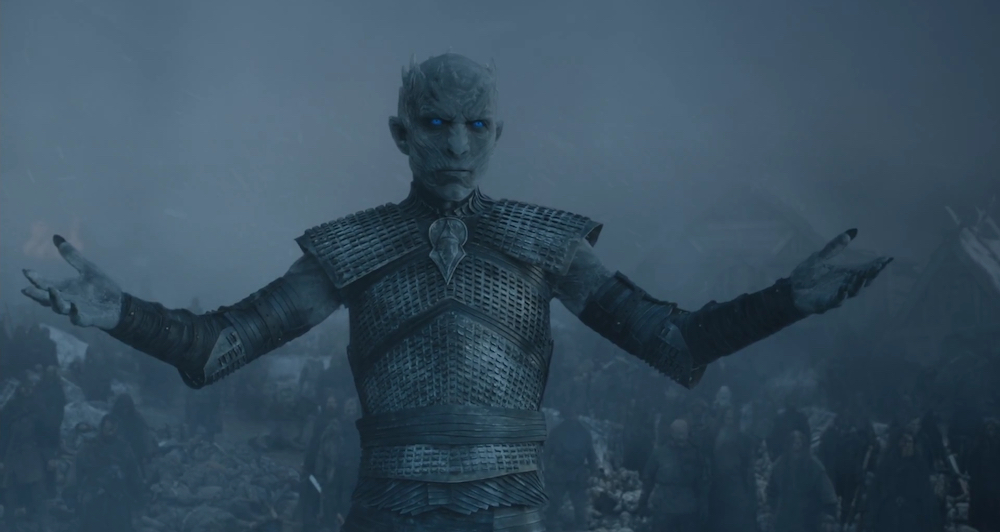 The Haitian zombie, whose evolution is intimately connected to the transatlantic slave trade, can be traced back to both Vodou, which resulted from the syncretism of diverse West African worldviews and forced conversion to Catholicism among the oppressed in Saint-Domingue (present-day Haiti), and to varying stories of a powerful sorcerer (bokor) bringing one back from the grave in perpetual servitude (usually as a field hand or worker at a sugar mill).

And the zombie myth that grew out of this context is notably subversive.

According to Sarah Juliet Lauro in The Transatlantic Zombie: Slavery, Rebellion, and Living Death (2015), the Haitian zombie emerged as a figure combining elements of both slavery and rebellion via its connection to the Haitian Revolution: through its ontological defiance and feared potential to awaken from its enslavement in utter revolt, the zombie juxtaposed both the oppressed and rebelling slave in an inherently resistant figure. “In its relationship to the history of slavery and slave rebellion,” Lauro indicates, “the zombie metaphor represents the human subject treated as object: either a walking corpse that is a stand-in for the slave – and thus a tool laboring for the benefit of another – or a crazed cannibal, the most denigrating image of the rebel-slave…whirling in pure fury” (pp. 62-63).

While the zombie’s powerful symbolic “reminder of the nation’s past and of literal threats of reenslavement to new tyrants” (p. 56) isn’t generally preserved in popular zombie narratives today, the figure’s subversive elements do continue to manifest in varying degrees.

Even in the coldest regions of Westeros. 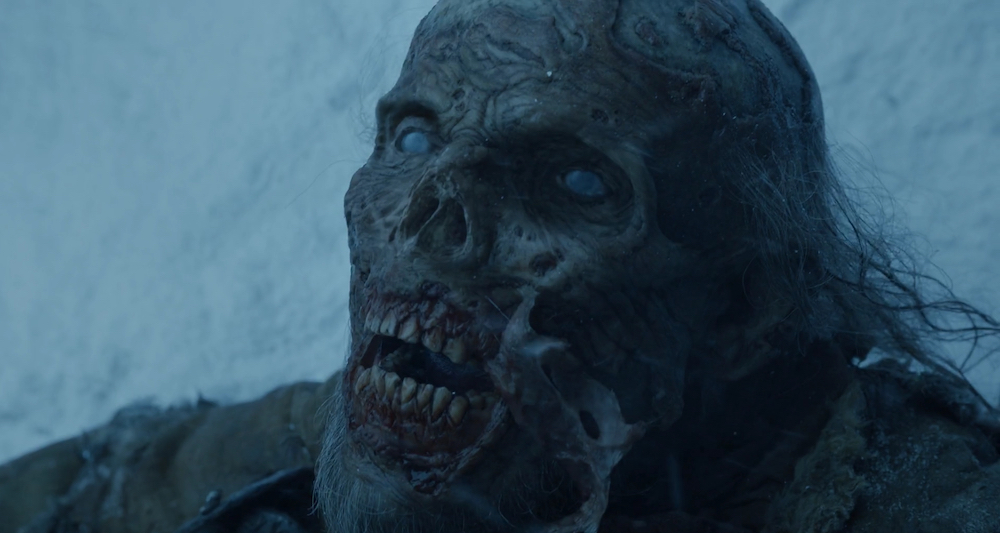 In The Subversive Zombie: Social Protest and Gender in Undead Cinema and Television (2018), Elizabeth Aiossa notes that “the perceived sanctity and security” of society is the prime target of any good zombie narrative: “Civilization collapses. Government erodes. Capitalism becomes obsolete, so the class system dissolves. Power returns to the people. Survivors of the initial zombie outbreak must band together, bond, then develop fresh paradigms for negotiating this new world disorder. Pragmatism replaces rugged individualism. Formerly marginalized citizens emerge as leaders, for they can teach the privileged how to endure an oppressive, common enemy” (p. 7).

Sounds remarkably similar to what’s been going on during the past two seasons of Game of Thrones, no?

Zombies have evolved into unique critical metaphors that Aiossa states can “rattle if not fully dismantle problematic Western heteronormative traditions, ideals, and dichotomies to their very core.” And when such categories are subverted, “the oppressive institutions and belief systems dependent upon them fail” (p. 7). These types of narratives, she continues, can indicate “how current stereotypes and subjugations are built upon faulty social constructs” and “inspire the living to work together as they attempt to survive and rebuild a just society” (pp. 12-13).

This is a preoccupation among critical remix artists as well, and something Martin’s narrative use of the zombie specifically signals.

Critical remix practices have long been effective means through which one might challenge or subvert existing authorities and conceptual orders. Historically rooted in groups like the Situationist International (1957-1972) and their methods of détournement (see image below), critical work among contemporary remix artists can be used to uniquely amplify the inadequacies or harmful qualities of those they target, such as various power structures and repressive social categories, as they push for a dismantling of dominant ideologies in creative and reformative ways.

“Hello, Men!” (September 1970)
“Designed to be cut out and pasted onto ad posters of the sort where a beautiful woman is juxtaposed with a masculine-oriented product.”

One of the main reasons these practices can be so effective is because they point viewers, listeners, or readers to the source material being reworked, juxtaposing new meaning with old in a way that allows the familiarity of former context to be repurposed through a creative and critical friction of multiple meanings and symbolism. Remix theorists refer to this sort of reflexive connection as a “regressive mashup” – regressive in that it points one back to originating source material, drawing most of its authority and effectiveness from the fact that such material is recognizable in the new instance, however obvious or not this may be.

Signaling the historic, subversive context from which the zombie mythos emerged, it’s easy to recognize the critical and regressive features of this Westerosi mashup.

One of the most popular ways the undead have been interpreted to critically function in Game of Thrones is through reading them as a metaphor for climate change. In an interview with New York Times staffers shortly before the final season aired, Martin weighed in on the climate change metaphor as well, noting the similarities between those living in Westeros and those in the real world fighting over “power and status and wealth,” distracted by the real threat growing stronger and closer that “has the potential to destroy all of them and to destroy their world.” Following this sort of reading, the ice wights might best be thought of as what Lauro, in Generation Zombie: Essays on the Living Dead in Modern Culture (2011), calls the “eco-zombie”: a zombie that “channels contemporary characterizations of a planet angered by humanity’s long-term damage…into a natural progression that comes to look like retaliation for humanity’s abuse of its environment” (p. 55).

The most blatant leveling of society came with the White Walker advance south – winter came, indeed, and it has been coming since the very first episode – so such a reading obviously hasn’t been unfounded. And as the impending long winter became synonymous with the presence of the White Walkers below the Wall (though they might not be the sole factor for seasonal shifts in Westeros), it’s been easy to view them as manifesting such a Westerosi reckoning.

But narrowing down such a binary-defying figure and deconstructive narrative trope into a specific reading like this should also be balanced with the complexity of so many other different elements and themes in the story, each of which reflecting in their own way the disruption of that “perceived sanctity and security” of society that Aiossa notes (especially since some consider the defeat of the Night King to be tantamount to a shattering of the entire climate change metaphor itself).

The master-slave, White Walker-wight dynamic in Game of Thrones doesn’t just allegorically reinvigorate Caribbean lore in an icy terrain of high fantasy epic battles; it creatively extends the symbolism and subversive power that the Haitian zombie established as it repurposes the myth in a new, critical context – whether it’s climate change as a specific contemporary concern, or the building of a more just and equally opportunistic world amid varying power struggles in general.

The Westerosi zombie critically remixes an already critical device in Haitian folklore to comment on the necessity faced to set aside differences and relatively petty preoccupations in order to address more imminent sociocultural concerns. And in the end, with Bran the Broken sitting on the throne to inaugurate an elective line of leadership (though not an actual democracy, of course, and to Samwell Tarly’s dismay), this is what has ultimately been accomplished anyway: the confrontation with an uncontrollable and embodied existential threat empowered those pushing for change to continue the course and work towards rebuilding a healthy and just world.

Seth M. Walker co-founded Nomos Journal in 2012 and served as its Editor-in-Chief until dissolving the journal at the end of 2019. He can be reached via his personal website at sethmwalker.com.