Oh the ocean said, “what are you trying to find
I don’t care, I’m not kind?”

You don’t know how precious you are
Walking around with your little shoes dangling
I am the one who lives with the ocean
It’s where we came from, you know
And sometimes I just want to go back
-Dar Williams, “The Ocean”

I hear two things from my bedroom window: the foghorn from the harbor and the waves of the ocean. I can hear other things too – cars and dogs and children and music – but there is the constant hum of the ocean and the regular call of the horn.

I live on the California coast, just over the hill from Silicon Valley, the center of the tech world, absurd housing costs, ambition, innovation, and work. I started my career as a Christian clergyperson in a congregation just blocks from where Hewlett Packard began, surrounded by tiny houses worth millions of dollars and high school students suicidal because of the social pressures to be perfect and successful. For most of us in the Valley, there is so much pressure not to fail, to be the best. This culture is a microcosm of our larger United States culture that insists if we dream big and work hard enough, we can “have it all.”

I served a congregation here for almost three years and struggled to hold the consistent grace of the ocean in tension with the insane demand of the Valley. I met with congregation members who struggled to keep up with that world, and I wanted to lead them over the hill to sit at the ocean, to find calm, and let the horn from the harbor be their pulse. The world tells them that they need to be better, but the ocean does not care what degrees you have, if your kids got into Harvard, what car you drive, or what app you’ve created.

Instead, the ocean curves toward the shore, wave after wave. Sometimes the waves are big and billowing, and sometimes they are small and flat. But, they keep coming.

Last week, I was sitting in front of the water, and the ocean kept coming, affecting everything it touched. The beach in front of me was covered in kelp and rippled sand from countless waves. The rocks I was sitting among had become home to ice plants and algae. The line where the sea level reached, depending on the time of day, was obvious.

There were surfers on the water. They lingered in the shallow waters watching the waves, waiting for whatever sign surfers wait for to know the next wave is the one. Then they slithered onto their boards, paddled out into the waves, hopped up and let the waves carry them back. And then they went back out again.

I was perched on a rock and tried to capture the grace of the ocean in crayon, letting the movement of the waves direct my stroke on the page. Watching the surfers, I marveled at how their bodies weathered the relentless waves, how the waves curled around them: water and people and earth. I wondered at how the surfers could just keep climbing back up onto their boards. I couldn’t easily explain those connections, so I trusted my hands to do that work, arching color across the page in wax. 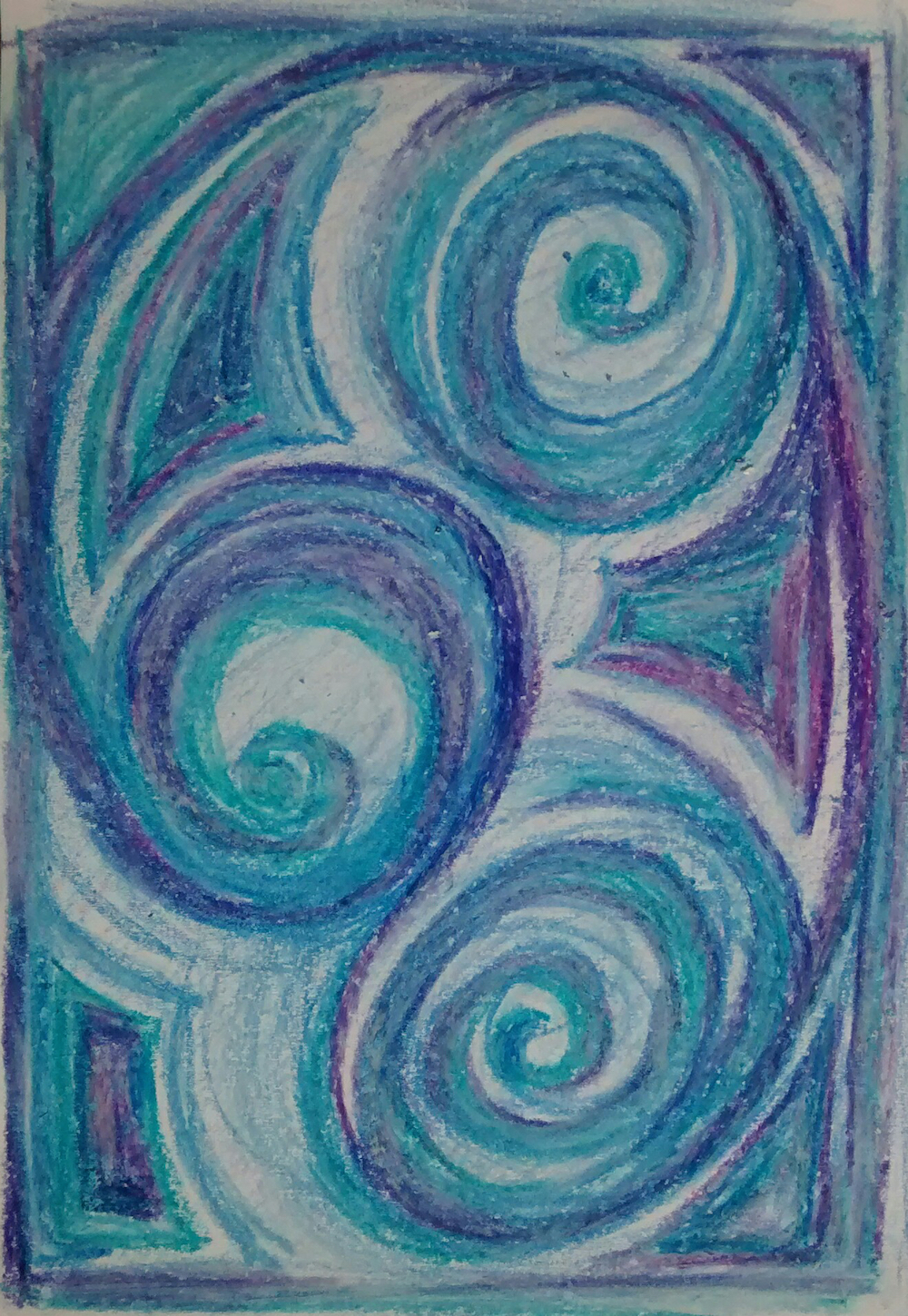 I’m originally from the Midwest, and when I left it for my first call in Palo Alto, I was sure that I would miss the flat farmland and white oaks and the riverbanks of Northern Illinois. Three years later, I’m not quite used to this landscape. This view – this never-ending water running into sky – I’ve never gotten used to it. The waves keep coming, never exactly the same, but never completely different. Water is water. The waves remind me of God’s grace because the waves come no matter what. This big blue body of life is just pulled inward, kissing the sand.

Grace, in my Protestant tradition, is a gift from God that we cannot earn – it is a gift that makes a bridge between God, people, and creation, and it is so hard to understand. We can’t actually be perfect, try as we might, even if we are trying to reach out to God. We’ve tried, in the doctrines and confessions of my tradition, to describe it as whatever it is that draws us to God. And so I’ve begun to try to understand grace – and God – through the ocean.

Whenever I sit on the shore, letting the sound of the waves hold me there, I’m reminded of how much we do not know about the ocean. Explorers across the ages have traveled across the seas and into the deepest parts of the waters – and there’s still so much more to know about the ecosystems and species of the oceans. The oceans have called others to dream bigger dreams and to live larger lives than they could imagine. Sometimes that’s scary (hurricanes and sharks and the unknown), and sometimes it’s exhilarating. And yet it calls, bringing those adventurers and surfers from what they already know to something more.

Grace is like that, unknowable and yet recognizable, a little scary because we cannot define it or understand it in an objective way, and scary too because of how we in many Christian traditions try to describe it: God’s ceaseless love for creation even though we fail to care for each other in the ways that we are supposed to.

And that is grace: big, beautiful, perfect grace. Grace that comes washing over us whether we know the right words, have the right car, or do the right things. Grace that leaves our skin sandy, hair salty, and face wet – relentlessly calling like the horn in the harbor, beckoning us from our own little bedrooms and out into the world, to climb back into life and living, even if we fail to meet that world’s expectations.

Abby Mohaupt is an ecofeminist clergyperson in the Presbyterian Church, serving a rural farm-working community on the South Coast of Northern California. An artist and runner, she'd rather be doing headstands and cultivating conversations about how art and earth help us as humans connect with the Creator and each other.

Creating in the Shadow of Suffering
July 26, 2016
Creativity Alongside Creation
February 8, 2016