Over the last month or so, I’ve woken up to news article after news article about tragedies: the massacre of LGBTQ latinx and others at a gay club in Orlando, the attack on a Bangladeshi café, the failure of DAPA in the Supreme Court, and so many recent instances that cry out for recognition that Black Lives Matter.

Some of these are failures of humanity to be good and just to each other – they are crimes against humanity, in the truest sense of the phrase. They remind us that tragedy comes in many forms and is often outside our control.

These tragedies happen on a public scale, and they require a public response.

Public responses to these particular tragedies, and to the problem of evil more broadly, have been expressed in books, songs, poems, rants, Facebook posts, tweets, and visual art created as a way to make sense of suffering and pain around us.

We see examples of this in Jesse Williams’ recent speech at the BET Awards. His words paint a picture of the history of suffering for African-Americans in the United States and call the audience to remember their power in a nation that allows black children to be murdered. And in the wake of the Orlando massacre, Tony Award winning director and songwriter Lin-Manuel Miranda wrote a sonnet to express his commitment to love in whatever form it takes. These creations rise up in protest – life finding a way in the face of destruction.

These are tragedies and struggles that can stir religious questions within us – “where is God in the murder of black lives?” and “where is God in bombings of cafés and airports?” In theological circles, we call this questioning “theodicy,” the big conversation about why God allows evil in the world.

Many people, in the midst of personal discernment, illness, or struggle, turn to art therapy as a way to work through questions and find answers, to bring shape to intangible parts of life in this world. I’m not a therapist, but as an artist, I can say that the act of bringing something into creation has a way of making us more resilient. It reminds me of the way saplings will grow out of the carcass of a felled redwood, creating something new out of the death of an old tree.

Over the last two years, I’ve gone to worship services with broad questions in my mind and heart: why, God, is the world so broken, and why do people hurt on personal and systemic scales? These questions, for me, began soon after I left my first job in a church, when I was wondering who I wanted to be in the world. It was hard to read articles and not turn my face heavenward, echoing the words that we in the Judeo-Christian tradition attribute to Psalm 13 – “how long, O Lord,” will you forget us?

The prayers of confessions in the church services I’ve attended have just scratched the surface for me and are no longer enough. I’ve begun to carry crayons with me – because there’s something else going on, something we can’t always put into words, something that happens every time I go to church.

Somehow, putting wax to paper, I begin to understand the messiness of life – once blue runs into pink, purple happens, and it’s not always beautiful. And in adding colors, shades, and shapes, the questions remain, but they’re no longer the only thing I have to hang on to. These are prayers that bring a vividness to the questions of “why?” and “how long?” when those words are not enough.

This last month, I’ve been working on the question of where God (however we dream of her) is in the shooting of black men by police in the United States. Alton Sterling and Philando Castile were struck down by a racist system that has drawn lines in our society. I’ve wondered, with others, how we color outside those lines, and claim the space that remains for something more beautiful. How do we create something new?

And at some point this past week I was moved by the story of Shadrach, Meschach, and Abendengo, a story from the Torah in which men were condemned unjustly to death by fire by an empire. The story ends, not just with their survival through the fire, but with God going into the fire with them. The story leaves me with more questions than answers, and perhaps, right now, that’s an invitation to create more. 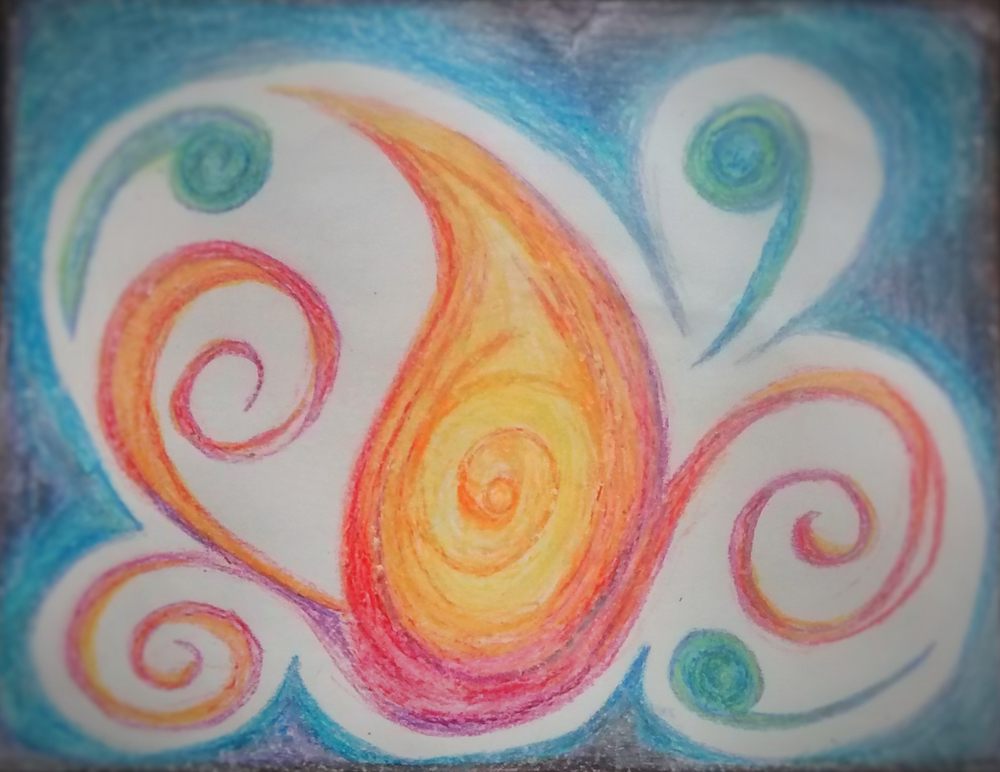 How have you used art or creativity to respond to religious questions or suffering? How might you see that in nature? What will you create in the world?

Abby Mohaupt is an ecofeminist clergyperson in the Presbyterian Church, serving a rural farm-working community on the South Coast of Northern California. An artist and runner, she'd rather be doing headstands and cultivating conversations about how art and earth help us as humans connect with the Creator and each other.