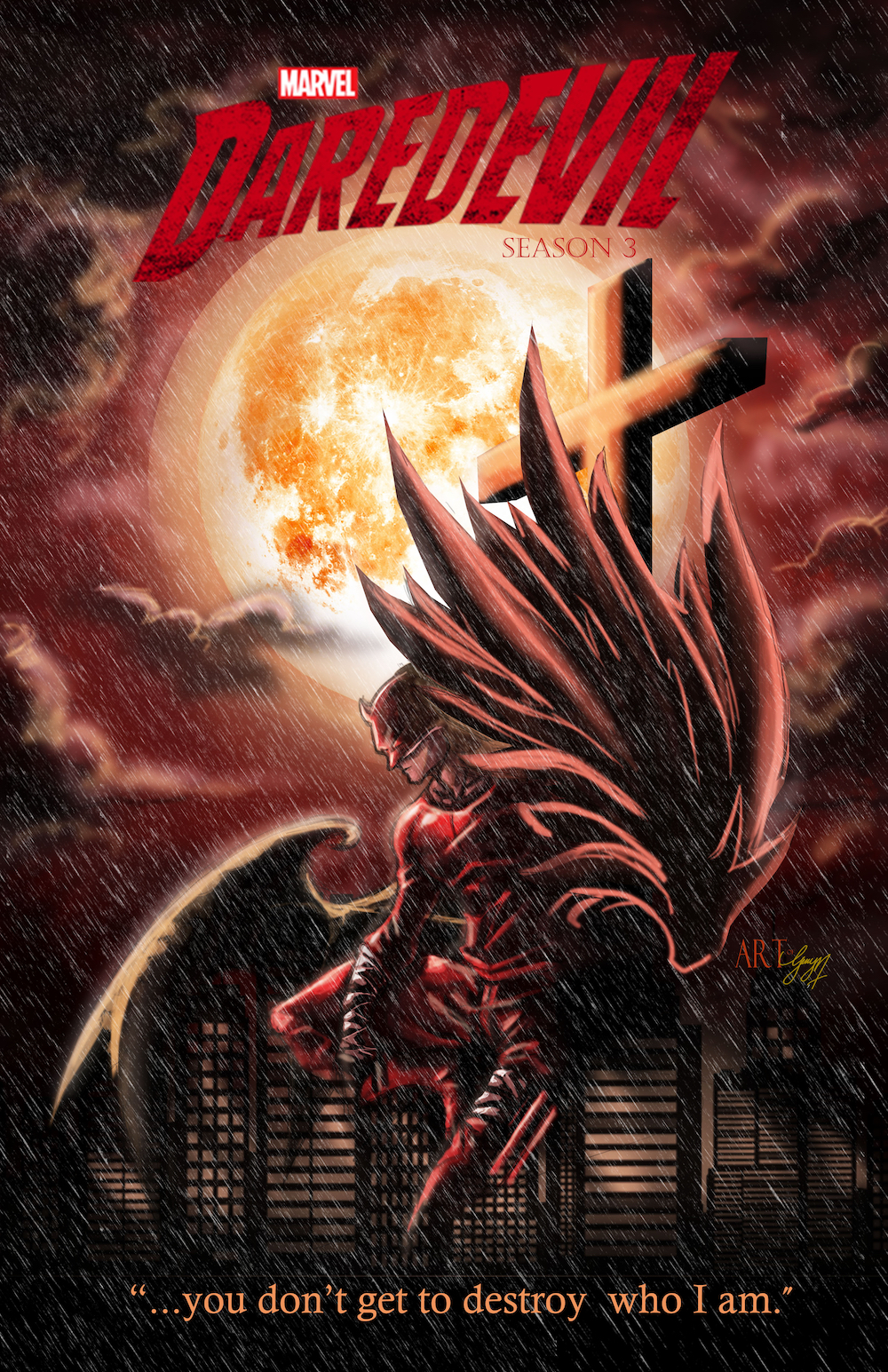 Every superhero is motivated for different reasons. Maybe they’re seeking vengeance for the death of a parent, rescuing a friend, or acting out of a perceived sense of right and wrong. Daredevil’s motivation is more complex, however. He fights because he’s Catholic.

Daredevil, also known as Matt Murdock, is a blind lawyer and vigilante who goes around at night keeping Hell’s Kitchen in New York City a safer place. His fighting techniques derive from his other enhanced senses.

Similar to the comics, Netflix’s television show, Marvel’s Daredevil, has embraced Catholicism as an integral part of the story. The show’s most recent season three has been praised by Catholics for its redemptive portrayal of the Church and especially Catholic clergy in a time when they are currently undergoing major criticism for exposure of abuse among priests.

For some Catholics, Daredevil is among the few honest portrayals of Catholicism on film. Growing up, Ellie, a Catholic and committed viewer of the show, watched animated movies on biblical stories and Romero while in Catholic elementary and high school, respectively. There were very few shows where Catholicism fit into a realistic, complex society. Daredevil changed that, however, because it was Catholic, yet, “mainstream, dark, gritty, kind of Dark Knight-ish,” she said.

Even before season three, Catholicism was an important theme. In the first episode of season one (“Into the Ring”), Murdock is in confession. “I’m not seeking penance for what I’ve done, Father. I’m asking for forgiveness for what I’m about to do,” Murdock told his priest and good friend, Father Lantom, right before he went to brutalize sex traffickers.

According to Gerry Mulowayi, a comic book illustrator who is also Catholic, Murdock “questions himself and whether or not he’s doing the right thing in God’s eyes.” Most of the time, Mulowayi notes, Murdock lands on stopping crime by beating up perpetrators.

The line he won’t cross, however, is taking a life.

This is very much inspired by his Catholic values, and both Ellie and Mulowayi agree. In season two, Murdock, as a lawyer, decided to defend a character named Frank Castle, also known as The Punisher, who was going to be put on death row for mass murder. According to Ellie, Murdock “did not believe, no matter what Frank Castle did, that he should be put to death for it.” The way he “conducts justice is in his thorough belief that it’s up to God to be able to say if someone is to live or die.”

Another Catholic value conveyed in the show is the virtuousness of Catholic clergy, which is certainly relevant during a time of continuous scandal and exposed abuse. In August, a Pennsylvania Grand Jury released a report of 300 priests sexually abusing over 1,000 children over 70 years. One of the cases indicated in the report details a boy who was repeatedly raped from ages 13-15, which gave him spine injuries and led to him becoming addicted to pain killers and eventually dying of an overdose.

Stories such as these have provided a damaging image of priests in the Catholic Church. Catholics with non-abusive priests, however, are reconciling the image of their priests with those in the news,  Ellie noted. Many Catholics are having to say, “no these are two different people.”

The kinds of clergy members that many Catholics know and love are the ones shown in season three. One of them is Sister Maggie, a newly-introduced character who remains with Murdock throughout the season, tending to his physical wounds and counseling him in emotionally distressed moments. Murdock eventually learns that Sister Maggie is his mother, who abandoned him at an early age. Maggie spends much of the season repenting for her mistake, even though it was a complicated moment in her life when she gave up Murdock. She wasn’t only experiencing post-partum depression; she was also a novitiate. Sister Maggie’s character is significant in this way because though she is flawed, she is making an understandable mistake, as opposed to priests abusing congregants.

The clergy in the show are also sacrificial. The most apparent example is Father Lantom, who threw himself in front of a deadly club thrown by the villain Bullseye (“Karen”). Doing this allowed people to escape Bullseye’s grasp when he was attacking a church. According to Mulowayi, “Being a priest means that you’re a shepherd.” Lantom’s care for his congregation was most pronounced, Mulowayi added, when he sacrificed himself.

In most present-day superhero cinematic presentations, religion has taken a back seat. No other protagonist in any Marvel Comic Universe (MCU) or DC Extended Universe (DCEU) movie has sat down in a pew and prayed to God, for example. No other constantly reflects on God’s approval of their acts, nor consults religious leaders to guide them.

For that reason, Catholics mourn the cancellation of the show, announced this past November.

“Daredevil, being gone for me, personally, it sucks,” said Mulowayi. To have his faith tradition portrayed in such a visible, positive, and accurate way was a huge part of why Mulowayi loved the show. Many other devout viewers can probably relate, too. The show introduced nuanced theological ideas, such as the sanctity of life and redemption, as well, which other shows overlook in their depictions of Catholicism, he added.

Mulowayi is not completely dismayed, however. Even though the most explicitly Catholic superhero has left the cinematic scene, “moral lessons are still being conveyed,” he said. Most superhero stories are “about doing the right thing, time and time again, even if it’s hard.”

An example is Captain America, who at the end of Avengers: Age of Ultron wouldn’t leave the city of Sokovia until every civilian was evacuated, right before it was going to explode.

While Captain America might not be setting a literal model to physically sacrifice oneself to save every person in an exploding city, Mulowayi notes that Captain America and many other superheroes make people “want to have that moral compass.”

And Daredevil, during its brief stint on air, was certainly no stranger to that trope.

Liam is a freelance reporter in Denver covering religion locally and nationally.