As its description indicates, New Religious Manifestations is a column that examines how historic religious traditions are marketing themselves to modern audiences. It also examines secular cultural practices and manifestations that have religious roots, though many people may be unaware of them. These religious roots may have simply disappeared over time, or in their adaption to modernity have lost their religious origins. Two particular examples in Adelaide, Australia, where I recently visited for a religious studies conference, can better illustrate some of these changes taking place, and the types of phenomena this column will be exploring in future posts.

Most people reading this are probably familiar, at least to some degree, with the notion of sacred spaces in religious traditions, and perhaps more specifically, Christian churches – as either churchgoers themselves or by having a basic understanding of what happens there. Since churches are typically used as sacred spaces, then churches being used for secular purposes would seem a little strange, right? Mind you, I’m not talking about churches being used for community meeting places, or meeting the needs of certain sectors of the community, such as teaching pre-school. I’m talking about churches that to some extent have significantly been redesigned to serve a completely different purpose and need, with religion being entirely absent. 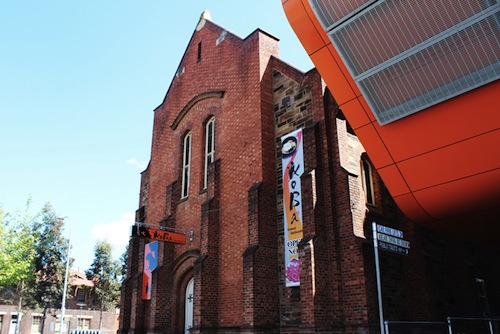 If you can’t make out the writing, it says “Koba,” and it’s the name of a Korean barbecue restaurant in the city of Adelaide, colloquially known in Australia as the “city of churches,” due to the large number of churches in the city dating from the nineteenth and early twentieth centuries.

Architecturally, the building stands out. While this restaurant is located on a street known for its dining in Adelaide, it resembles no other restaurant on this street. It immediately catches one’s eye because the building is, in appearance, a church – not a typical barbecue joint. The story for this particular church-turned-restaurant rests in the city itself. Adelaide is the state capital of South Australia and home to approximately 1.2 million people. South Australia is distinct in Australian history as being the only state that was not founded as a penal colony. Instead, it began life as a freely settled, planned British province. Some of the earliest people attracted were religious dissenters in Britain, aspiring entrepreneurs, and German migrants. As a result, South Australia is demographically and historically different from the rest of Australia. Religiously, Adelaide and South Australia have higher populations of Lutherans and dissenting groups than the rest of Australia. While all places can and do experience religious and cultural change, Adelaide’s distinctive history as a city makes its changes more unique and vibrant in comparison to elsewhere in Australia.

This restaurant is a clear sign of the broader cultural changes that have occurred in this city, which probably wouldn’t have been possible a century ago – or anywhere else in the world at that time. Given the evolving interaction between Western societies and institutional religion worldwide, it shouldn’t be surprising that a city such as Adelaide has experienced its own sort of changes in this regard. Perhaps due to its historical religious freedoms, Adelaide is a city that hosts some innovative usages of buildings that were once churches.

Here’s another example, on the outskirts of town: 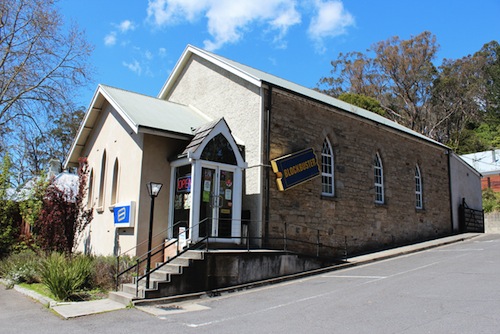 Once again, we can observe consecrated space converted into mundane, secular space: this time, a Blockbuster video rental store.

At first, I found these innovations amusing without considering whether they constituted some sort of sacrilege. It wasn’t until some months later that I realized this resembled how old storehouses or empty factories were now being used to hold religious congregations for often younger, newly established churches. It was the function of the space that mattered most – not the space itself.

In a city that, at least historically, was renowned for its religiosity, these two buildings might indicate a decline in religious adherence and practice – a trend that many theorists locate within the processes of modernization and secularization. However, at the very least, it does seem to indicate a decline in the extensive public religious participation that once characterized the “city of churches”: due to broader cultural and societal shifts, along with their own unique circumstances, these churches at one point no longer became sustainable and the properties were sold.

Whatever the exact circumstances surrounding these two churches may be, they demonstrate the kinds of questions and concerns this column will be engaging: the cultural and social consciousness at the time that allowed changes like this to occur, and what this says about the respective society and culture in which they’re situated. As religions and societies are continually changing, so too are their interactions, often in unknown and unrealized ways. This column isn’t meant to be judgmental about these changes. Its analytical engagement aims to help others be more observant of the new religious manifestations around them and what they might learn in the process.