I’ve known Mostafa Azizpour Shoobie for a couple of years. He’s an Iranian student studying Indian literature at the University of Wollongong and works with me in an office on campus. Since we’ve known each other for some time, less conventional topics for discussion, such as religious practice, have come up in our conversations. Recently, Nowruz, or the Persian New Year, is a topic that has specifically come up since its celebration is approaching. I missed the festival in Wollongong last year because I was overseas, so I’ve been especially fascinated to hear about its celebration, and how certain aspects of it have changed over time. But, the complexity and changes it has undergone, and how it is celebrated in a local diaspora community (Wollongong), signal more than just a particular festival’s evolution: they reflect changes that continuously take place among traditional communities and within customary practices worldwide.

Nowruz marks the beginning of the New Year according to the solar hijri calendar, the official calendar in Iran, and occurs with the vernal equinox. The roots of Nowruz have been traced back to Zoroaster, the sixth-century BCE Persian prophet who founded Zoroastrianism, a dominant religion in Iran until the steady arrival of Islam during the first three centuries following Muhammad’s death. Since then, Nowruz has undergone numerous developments and changes, and as Mostafa explained, especially the way it is practiced in Australia among Iranian students and immigrants in the local community. Although these developments are of particular interest to me for the purpose of this post, the celebration’s more traditional elements are equally fascinating and help ground the noticeable changes that have since taken place.

One of the main cultural practices associated with Nowruz, Mostafa explained, is the haft sin. The “canonical” haft sin is a table with several specific food-objects placed on it to symbolize good fortune. These foods are: sabzeh, which is wheat or barley growing in a dish, symbolizing rebirth; samamu, a sweet pudding made from germinated wheat and symbolic of affluence; senjed, the fruit of wild olive and symbolic of love; serkeh, or vinegar, which symbolizes age and patience; sib, or apples, which symbolize beauty and health; sir, or garlic, symbolic of medicine; and finally, somaq, or sumac, which is symbolic of the sunrise’s color. Alongside these items, additional items forming a looser “canon” of objects can be added to the table, including: a mirror; candles; golab, or rosewater; goldfish; and painted eggs. Below is an example Mostafa showed me of what this table can look like, from the Wollongong Persian community. 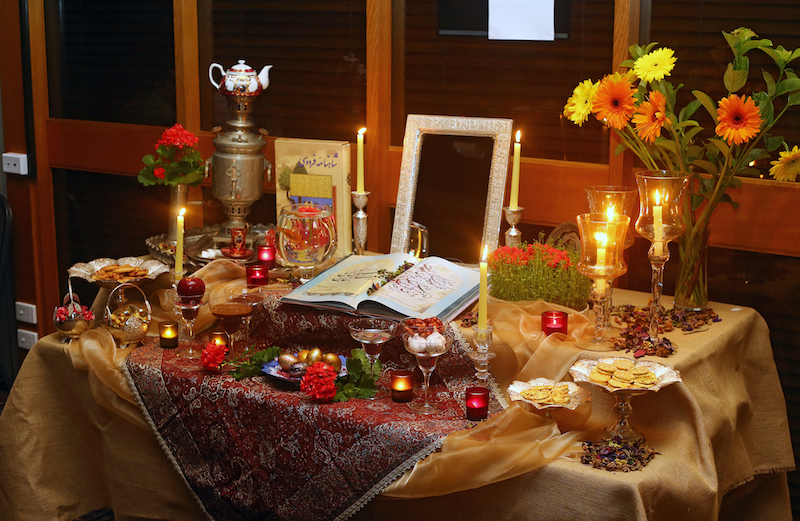 With an interest in religious and cultural practices, and aware of Mostafa’s background in literature, it wasn’t long before I asked him about the books I noticed on the haft sin. Mostafa told me it was another tradition associated with Nowruz:  fal-e hafez, or “the omens of Hafez” – a fourteenth century Persian poet. The fal-e hafez is a form of bibliomancy (the practice of divination by relying of random passages from a book or text) involving the book of Hafez’s collected poems. A person opens the book randomly, and it is then handed over to a friend to read out the poem that appears on the page. Hafez’s poems have multiple interpretations ranging from the lyrical to mystical and philosophical. However, it is believed that the poem chosen and read in this manner reveals something about the first person, either their character or future. Hafez’s book of poetry has become important enough that it even rivals the Qur’an for a place on the haft sin, as usually only one of the two books is included.

Another interesting feature of Nowruz that Mostafa described was Hajji Firuz: a man covered in soot who wears bright red clothing. Hajji Firuz dates back to the Sumerian myth of Inanna in the Underworld. Inanna, the goddess of vegetation and life, went missing in the Underworld, causing life on earth to become arid. The gods told a shepherd to go down and rescue Inanna. This is the mythological basis for Hajji Firuz being covered in soot (a mark of his time in the land of the dead), and his bright clothing is a sign of the return of life to the earth. Mostafa told me that when he was a child in Iran, people – usually the homeless – dressed up as Hajji Firuz around Nowruz and did street performances for donations. In the Persian diaspora in Australia, however, Hajji Firuz dolls appear in people’s homes, such as the one below, belonging to a mutual friend’s two-year-old son. In the space of twenty years and the growth of a diaspora, street performers have been transformed into dolls for children and display. 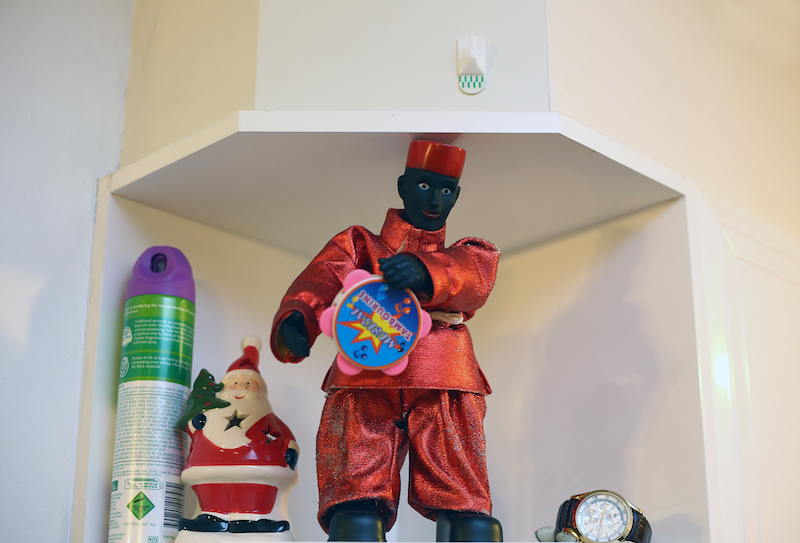 Nowruz is not alone, however, in being a religious and cultural celebration that has survived and evolved for millennia, as many different religious communities have begun to appropriate innovative technologies and contemporary trends into their practice; the rise of online religious communities among many different traditions is especially indicative of this. Like all of these celebrations, Nowruz has continually undergone changes and manifested in newer and newer ways. The Nowruz of today is not the Nowruz of years ago, and it won’t be the same Nowruz in years to come – in Iran or surrounding countries, or even in diasporas in Australia and around the world. Regardless of whether or not some of these developments remain less obvious to people today, such as the incorporation of the Qur’an and Hafez’s book of poetry on the haft sin (neither of which would have occurred before the spread of Islam or the life of Hafez), or the manner in which Hajji Firuz has changed – during one man’s lifetime and throughout its varying historical and geographical incarnations – Nowruz is a great example of how important celebrations and practices evolve over time and space and continue to manifest their relevance in contemporary contexts.

Such manifestations are only natural since religious belief and practice is hardly ever truly static. Whenever people find themselves in a new environment and they carry their religious beliefs and practices with them, new avenues for expression are needed. These new avenues are not like the old; therefore, their religious expressions become slightly altered. For example, the rise of new technologies, such as the Internet, now allow anyone to do their own fal-e hafez at any time, even if they don’t know Farsi, since it has been conveniently translated for them.

But, regardless of whether you’re living in Iran or Australia – or elsewhere – there is a tradition that has remained relatively untouched: the Chaharshanbe Suri, which is remnant of a Zoroastrian fire-jumping festival observed on the last Wednesday of the year. Colloquially, however, it also doubles as an opportunity for men to showcase their prowess and daring by jumping over large fires. Mostafa told me that when you jump you chant: “Zardi-ye man az to, sorkhi-ye to az man,” or, loosely, “My yellow upon you, your redness upon me!” This is done because it is believed that by jumping you give the fire your sickness and in return you receive the warmth for the New Year. Like the other Nowruz traditions, and despite their adaptations, there’s a timelessness to Chasharshanbe Suri. Maybe it’s that people will always celebrate and express their beliefs in some way, shape, or form, or perhaps, men, and young men in particular, will also always try to impress young women, as Mostafa can be seen doing below.