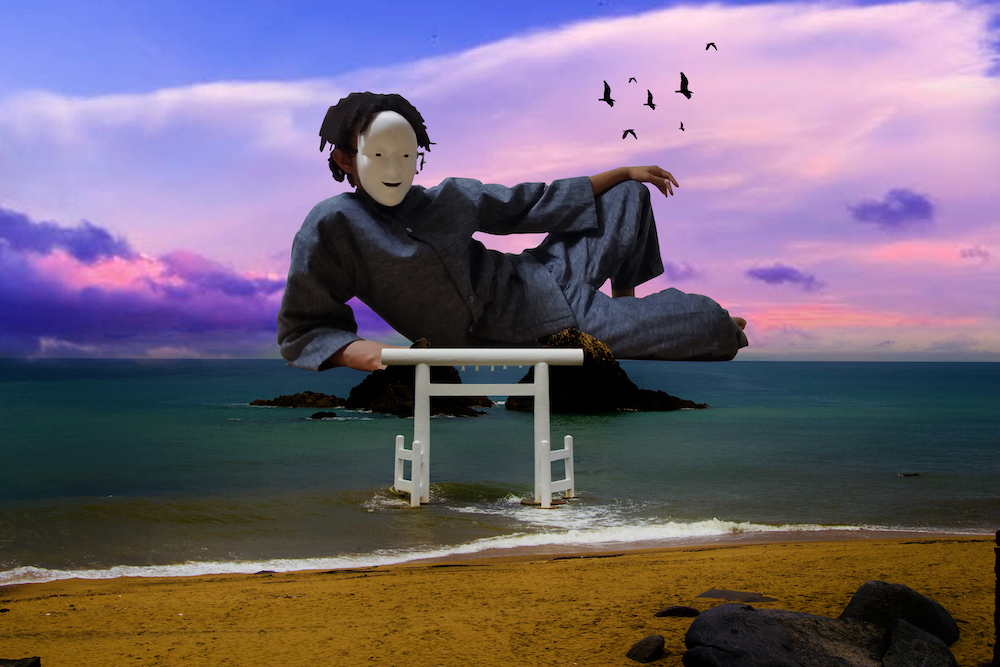 We’re here to connect. To others and ourselves.

These were the last words Chinmoku said to the king of Itokoku. But he wasn’t sure why he was thinking about that now. He was wet and smelled of salt. The sun was rising. Birds sang to the rhythm of the sea. He soon realized he was looking down at Futamigaura Beach. The white torii gate that guided the gods from Sakurai Shrine stood intact. Behind it were the Lover Rocks connected by the rope signifying eternal love. The gods would symbolically travel from Sakurai Shrine to the rocks through this gate.

He wasn’t exactly sure why he was here, but he was sure he came by way of the sea. He was also confused as to what his advisor mask, a wooden painted mask of a woman used in the ancient art of noh theatre, was still doing on his face. He only wore it and the indigo-dyed cotton garments he had on when working as an advisor to the royal family. He was sure he was still in Itokoku Kingdom, but something felt different. He was looking down from a hill with a fence he’d never seen before and behind him stood stone statues of each animal from the Chinese calendar. Seeing them reminded him of his Chinese contacts who visited the kingdom often.

He saw a strange gray material lining what looked like a road immediately below the hill, as well as stairs made of another material with which he wasn’t familiar, running down towards the sand. Suddenly, something moved along the road. He had seen carts carried by beasts before, but never this thing. It moved quickly and had illumination in the front and back of it. It was essentially a moving box. Chinmoku felt his hands starting to shake and the back of his neck tighten. He had a similar response whenever new travelers would arrive at the port to Itokoku.

There were so many unknowns in this space, but he was prepared. He had led countless travelers on a journey through utter foreignness. He understood at a granular level the simultaneous fear and wonder one felt when traveling. As the main advisor to the king, he connected other kingdoms to his own. He would guide travelers around the kingdom to create relationships for trade, and he would also repay their generosity by visiting their homeland. He was used to adapting to the situation at hand.

Those moments strongly resembled the same gripping fear he felt now bundled tight in his chest, like the fibers in a straw roof. So he did what he always did: he started to move to open his mind. Standing up, his wet garments clung to his skin like a child to its mother. The steadily rising sun hinted that he would soon be dry in the summer heat.

After the sun showed its entire face, Chinmoku started to see people in the moving boxes get out. They would walk along the beach together – mostly couples or a group of young people. He decided to approach two young girls who excitedly moved towards the Lover Rocks. In his experience, women always seemed to know the most about what was going on.

After they climbed down the stairs, they stood in front of the torii gate. They turned their backs to it in seconds and held up a black stick with a rectangular black object attached. Laughing, they smiled, cocked their heads to the side and held up their fingers split in two staring down at it. And in the next moment, they stopped laughing and fell silent. They detached the black object to look at it. Their faces disappeared behind their long black hair.

“One more time!” the girl holding the stick said in Japanese. Her voice was high-pitched, but the language seemed similar to what Chinmoku was familiar with.

They held the stick up again and repeated the process. And again they stared down at the object, paying no attention or respect to the gate behind them. Chinmoku’s nerves turned hot. The consequences for disrespecting artifacts were extreme, usually an immediate and permanent expulsion from the kingdom whether native or foreigner.

He walked towards them, the sand rushing into his sandals. Of course, they didn’t notice him, as their eyes were locked onto the black object in their hands. The hair covering their faces blocked any sensations from the outside world.

Out of nowhere, he remembered the last conversation he had with the queen.

My husband cannot see beyond the wealth of our visitors. His hunger has grown insatiable. But you and I know that this is not sustainable. It has been repeated countless times throughout history. We must preserve the integrity of Itokoku and all we have built here. Please, take this red rice from Nijo bathed in the glory of the Mirror and sleep. Sleep until the kingdom will need you to guide it again. I will handle things here. Until he brings us to our hasty demise.

The queen’s face lingered in his mind’s eye. Her resolve unwavering even in death.

She sent me here to preserve the kingdom, Chinmoku thought.

He took a deep breath and his shoulders dropped. Suddenly, the environment melted into some amalgam of color. A wall of color he could scale. He was in flow.

He approached the two young girls as they obsessed over their black object, and he spoke.