When we discussed religion in the last post, we looked at the link between mental illness and religious belief on television. While Mr. Robot features a protagonist suffering from mental illness who vehemently rejects organized religion, what’s most interesting in this show is the way forms of religion are rejected while parallels emerge elsewhere.

Mr. Robot began its first season in 2015 on the USA Network, with Amazon.com gaining video on-demand rights shortly after. The central premise revolves around Elliot Alderson, a computer programmer/hacker who is part of “fsociety.” The aim of fsociety is to take down a global conglomerate, E-Corp, referred to by Elliot as “Evil Corp.” For Elliot, society is corrupt and needs to change. Evil Corp, with its capitalist control, is a major player in the corrupt system Elliot sees, and taking them down will begin the process of changing society. This element of capitalist control is linked to his dislike of religion, which is coded within the series as a dislike of all organized religion – both it and capitalistic structures are seen by him as enslaving society like addicts.

Running parallel to his criticism of capitalism, Elliot rails against the issue of control in organized religion, which is particularly discussed in the second season during the episode “logic-b0mb.hc”:

I’m talking about all organized religion. Exclusive groups created to manage control. A dealer getting people hooked on the drug of hope. His followers, nothing but addicts who want their hit of bullshit to keep their dopamine of ignorance. Addicts. Afraid to believe the truth. That there’s no order. There’s no power. That all religions are just metastasizing mind worms, meant to divide us so it’s easier to rule us by the charlatans that wanna run us. 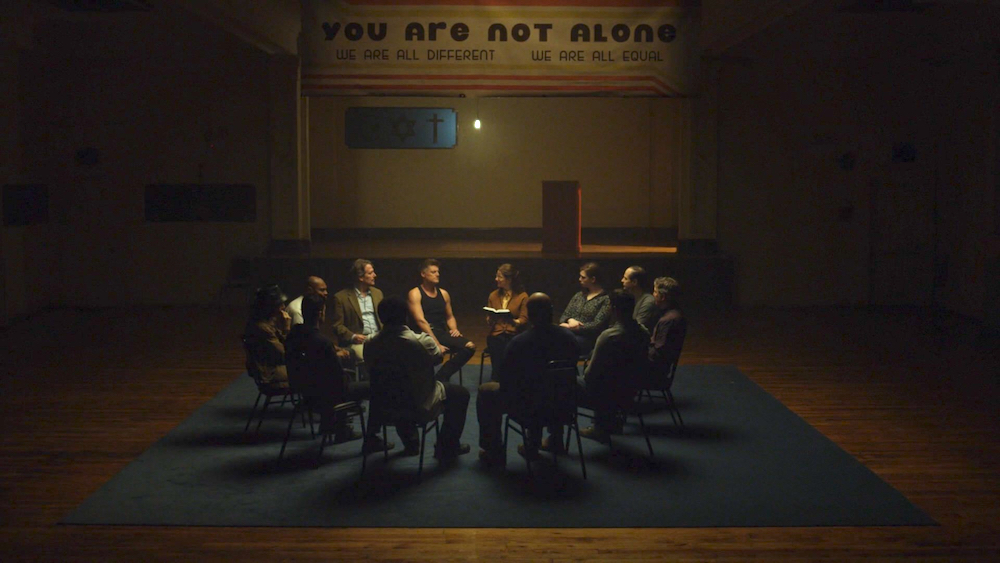 Elliot’s objections are interesting, namely due to his career and identity as a hacker (as well as his own addiction to pills covered in the first season). Technology, specifically computer programming, allows for people to create their own (virtual) world and “play God” within the confines of code. It provides an ultimate form of control where decisions are mapped out and pre-written. The operation of the virtual environment depends on the author of the code, in an echo of the creation of the world, which is a prominent general theme in many religions. The speech above occurs at the prison church group he joins (discussed below), which features a Christian crucifix on the wall, as well as a prominent cross (as shown in the screenshot – it takes the visual center of the shot rather than the other religious symbols alongside it) establishing the particular brand of organized religion to which Elliot sets himself in opposition.

In particular, Elliot opposes the idea of God as being a method of control, a “metastasizing mind-worm” that offers a bone of contention. God offers no solution to Elliot, and the realities of the world do not follow what is promised by many religions in return for worship. Elliot, who has been controlled by addiction, shuns what he sees as the control of religion. It is not just addiction that has controlled him, but the appearance of a hallucination in the form of “Mr. Robot,” his dead father, who controls his actions and decisions. Elliot draws a comparison between the worship of an imaginary friend by others (whom he calls God) and him listening to his imaginary father (a product of his hallucinations). His relationship with “Mr.Robot” is acrimonious; he strenuously attempts to resist all control “Mr.Robot” has over him and goes against the “wishes” of his hallucination. Elliot’s speech (part of which is written above) becomes a rant primarily against God, and concludes with him spitting, “If I don’t listen to my imaginary friend, why the fuck should I listen to yours?”

Fsociety is the manifestation of this rejection of control – by Elliot creating a new world through his technological skills, it allows for a disruption of the current one, and thus a break in control. From a functionalist perspective, fsociety is his family and place of worship. Although his experience of it is fragmented due to his mental state, it gives an outlet for his reverence for code and allows for the expression of things like belief and belonging, paralleling qualities that are important in many religious traditions. Fsociety is headed by the very “Mr. Robot” that Elliot hallucinates, and we see Elliot’s realization at the end of season one that he is “Mr. Robot”; during drug-induced blackouts, “Mr. Robot” takes full control and plots the directions and actions of fsociety. Elliot is thus worshipper and head of the group in which he invests his faith. It is the religion that can rule the world: founded on the worship of a dead/mythical/imaginary person who is also “the son,” it parallels the conditions of Christianity with the relationship between the father and the son. Both organized religion and fsociety offer rules and structures for the world; fsociety wants to change those structures through the language of code, similar to how many religions use texts.

A 2014 study, based on data collected by the University of Chicago, suggests that the advent of the Internet has contributed to a noticeable decline in religious affiliation (presumably theistic traditions, though the report isn’t entirely clear). Although there are other factors that have contributed, such as an increase in education and a decrease in religious upbringing, Internet use appears to be a significant factor. The Internet has been such a fast-moving and ever-progressing part of modern life that it is perhaps too early to say what sort of total impact it has had – or will have – on society and everyday life. Yet, the idea that the Internet, technology, and education have impacted religious belief is reflected in a variety of television series like Mr. Robot. Another factor to consider is the change in expressions of religion; studies like these are concerned primarily with traditional organized religions, which is somewhat limited. This change in expression is exactly what prompts the rejection of organized religions like Christianity and religious parallels elsewhere in Mr. Robot – while Elliot spurns organized religion and what he sees as its attendant menaces, he indulges in religious-type behaviors in fsociety. But, to many viewers, a strong rejection of Christianity and “God” may pigeonhole him as atheistic.

Highly intelligent hackers and programmers such as Elliot are just one characterization of atheists onscreen. Other examples of intelligent atheists on television include Gregory House (House), Temperance Brennan (Bones), and Sheldon Cooper (The Big Bang Theory). Intelligence and faith don’t appear to correlate highly in televisual narratives, perhaps due to supporting evidence between the two and the tendency for television to accurately reflect societal trends. However, despite their intelligence onscreen, atheists are predominantly shown as being flawed in some way – the examples above attest to that (House is an addict, and Brennan and Cooper are depicted as neuro-atypical, and thus, not “normal”). Yet, despite the trend of intelligence equating to a negative correlation in belief, there have been reports of a move to build up church communities in Silicon Valley, an area notorious for its technologically-minded inhabitants; while it may be the need for community that is driving this movement, how exactly “church communities” differ from secular social clubs is a topic for another post. But, this is something that is reflected in the narrative of Mr. Robot. When he is in prison, Elliot joins the prison church group to become involved with people as it fills the void of fsociety while he is unable to see them. The need for these theistic frameworks – or even frameworks that reflect the behaviors and patterns of organized religion – are evident in shows like Mr. Robot and in society in general. It causes us to question what exactly it is that people deem important and why it takes similar forms across traditions.

As always, with examinations of these references to religion and faith onscreen, Mr. Robot is one example that offers no blueprint for understanding the personal beliefs of those it seeks to represent. Still, the very existence of these characters and the responses they provoke clearly evidence their importance. Their limitations may be outweighed by the conversations they generate. With technology becoming such a central part of our lives, it is inevitable that it will impact traditional modes of faith in some way. The way technology is treated, especially in narratives like Mr. Robot, can be argued to parallel elements of certain religions. Despite his atheism, Elliot still searches for understanding, just like many believers.