The recent television show iZombie utilizes a well-worn trope in the post-apocalyptic narrative: the religious cult. Like some of the other shows I’ve looked at in previous posts, it takes the desperation of a changing world and channels it in a number of ways. However, the religious cult established in iZombie seems to have all but disappeared for its fifth and final season. It has given way to an out-and-out war that re-treads the old ground of “us vs. them.” While it could be argued that previous series discussed (such as The Leftovers or True Blood) took on this idea to work through the post-9/11 anxieties about religious faith and the “other,” iZombie’s portrayal of the religious cult and its subsequent abandonment demonstrates a facet of identity politics rather than a real consideration of belief.

Monsters that were all too human began increasingly dominating screens in the post-9/11 moment. Although a longtime staple of the screen, there began to be a more sympathetic portrayal of the monster that focused on the figure in the midst of the everyday. There was the influx of the undead in the form of schoolboy vampires (Twilight, Vampire Diaries), along with vampire members of the community (True Blood, Being Human). Then there were zombies who sprung up post-apocalypse (The Walking Dead, 28 Days Later, Zombieland, Land of the Dead). Whether on film or television, the monster was having a moment, being revered rather than feared.

These figures all found a way to think through the “us vs. them” dichotomy that had proliferated the cultural moment in the aftermath of 9/11. Given the increased humanization of the monster, new approaches opened up that allowed for a more nuanced consideration of difference.

One particular facet that emerged was the use of the monster to think through religious identities and difference, as can be seen in True Blood. However, when it comes to the creatures of iZombie, there is little in the way for consideration of religious identities. The zombies are seen as an infection, treated as inhuman, and segregated from the population of Seattle, where the series is based. Although viewers empathize due to the protagonist being a zombie herself, many of the characters in the series show a discomfort around the idea of the zombie. They still remain “other” and are subject to abuse from their human counterparts.

By season four, Seattle has been walled off (now “New Seattle”) due to its zombie “infection” and tensions are running high. Angus, the son of local crime lord Blaine, takes advantage of this by establishing a church and naming himself “Brother Love.” Recently escaping imprisonment, he claims God had kept him alive while he was near death from starvation. He preaches to disaffected zombies in a church and shares brains with them in a mimicking of the sacrament. It is unclear whether he believes that God saved him, or if he is exploiting the climate of New Seattle. What is apparent is his ability to manipulate his followers to help him financially succeed by smuggling goods. As such, he presents a confusing character: why make him the head of a new religion (figured as a kind of zombie take on Christianity)? Doesn’t this follow many of the other presentations of religious figureheads onscreen who are exposed for their hypocrisy? In True Blood, viewers see this in Reverend Steve Newlin espousing conservative beliefs and ultimately being outed as gay. This is also apparent in narratives that do not engage with the undead, such as The Leftovers, the topic of a previous post. In The Leftovers, Reverend Matt Jamison leads a church while running a violent smear campaign against those who departed. When it comes to the post-apocalyptic narrative, the hypocritical religious figurehead is another well-worn trope.

Given Brother Love does not depart much from this role, iZombie appears not to offer much other than a criticism of rigid identity categories, perhaps keeping in line with many other portrayals. However, it should be noted that in the other examples, there are aspects to those characters that create a more detailed depiction – such as Matt Jamison’s relationship with his family, or Steve Newlin’s struggle with his sexuality. Perhaps the lack of detail in iZombie can be linked to its status as a more comedic product and aimed at different audiences. What is clear, though, is that by casting Brother Love in this fixed role, it reinforces an idea of religious belief as being a kind of mask for a true self that uses the positive elements of religion to hide behind. 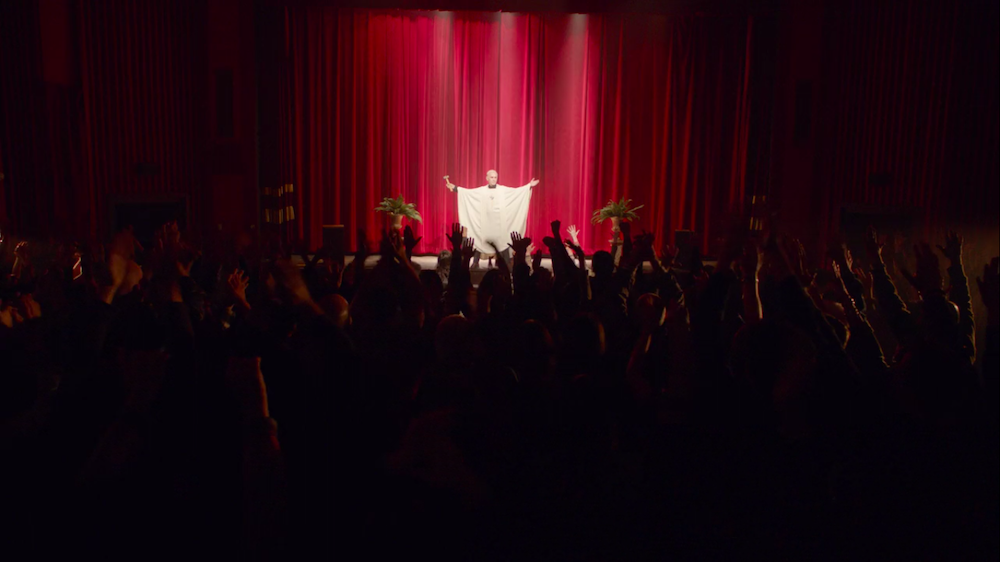 By the end of season four, Brother Love and his followers have been shot dead. There are still other factions and groups present within the series: Filmore Graves, Renegade’s crew smuggling in new people to cure their human illnesses through zombification, and the Dead Enders who hate zombies. When compared with these groups, Brother Love and his followers appear to be merely another voice of dissent against the status quo. Their belief isn’t dwelt upon in much detail in the series, but simply used as another way to differentiate between “us” and “them.”

As Frederic Jameson argues in “The Dialectics of Disaster” (2002), “what is called religion today (in a variety of forms, from left to right) is really politics under a different name” (p. 301). Brother Love and his followers are acting in a political fashion akin to the other groups within the series. Their ideas are grounded in identity politics, and a sense of establishing a new order. The elements of religious belief are shallowly depicted, making it merely another approach to the zombie crisis. Although there is frequently a blurring of lines when it comes to the religious and political in Western culture, the focus on the political aspects here undermine the religious aspects of Brother Love’s group.

The consideration of religion in the aftermath of such apocalyptic or world-changing events (i.e., the emergence of zombies) could explore the numerous ways that religion functions within society (as anchor, community, identity marker). However, here, the religious group is used as shorthand for antagonist. That Brother Love is shot dead is also relevant: not all groups in iZombie fighting for a cause come to an untimely demise. As with True Blood, the seemingly religious group is portrayed as being the wrong type of dissent. The elimination of Brother Love reaffirms the need to curtail the inherent threat of the “bad” monsters, allowing for the protagonist’s more human version of the monster to be framed as the acceptable identity. Her humanization rests with her tolerance of both sides of the zombie-human divide, in comparison to the divisive nature of those other “bad” monsters.

Given the move towards humanizing the monster in a post-9/11 context, and the way in which identity and difference has become more nuanced, what iZombie affirms is that, despite our empathy with the zombie protagonist, there are still “good” and “bad” monsters. As with other post-9/11 monster narratives, when our monsters are figured as religious (see the Sanguinistas in True Blood for another consideration of this, or The Dutch in Being Human), they are portrayed negatively. These religious portrayals usually reflect Judeo-Christian traditions, but focus in a limited way on the actual religious belief itself. Instead, it is functioned as an aspect of monstrosity that is deemed “bad,” which reinforces the notion of the “good” monster with whom we should empathize.

But, while identity-defining religion is presented as something unfavorable, an absence of any belief onscreen is also seen as negative. Zombies until now haven’t encountered this engagement with belief in any great detail, but they are beginning to follow in the footsteps of post-9/11 vampires. As such, the use of the monster to consider human behavior such as belief is perhaps limited due to its adherence to a well-worn trope. However, there is scope to go beyond the now-common portrayal of the religious group as indicator of the “wrong” kind of identity. While iZombie may be another step towards us understanding difference through an acceptance of otherness, the difference in belief is something we need to explore further. Thus, the series reinforces the fact that we still have a long way to go towards thinking more about belief and difference. Despite our monsters becoming increasingly humanized, our differences still remain as the most frightening thing.